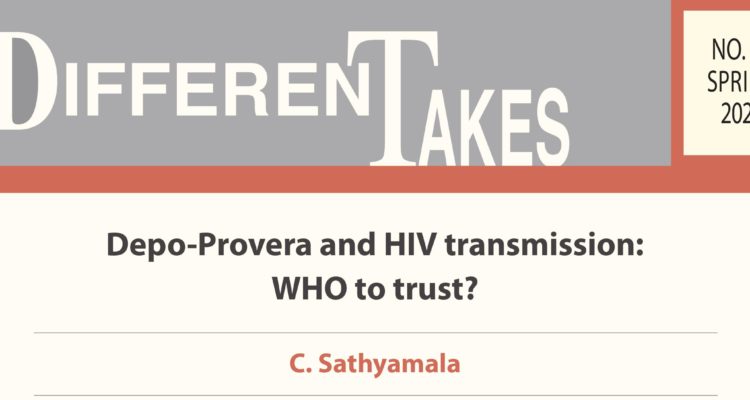 Concerns about Depo-Provera and increased rates of HIV transmission are of vital importance to women’s health, especially to those at high risk of HIV acquisition. Despite compelling evidence of a Depo-Provera-HIV link and regulatory bodies’ unclear guidance around the method’s use,distribution of the injectable contraceptive has been on the rise. For instance, in 2017 the Indian government began offering free Depo injections through its public health system, despite opposition from women’s and health groups in India.  Since 2008, a public-private partnership has tested and distributed the Sayana Press, which delivers a lower dosage formulation of Depo-Provera, in countries including Uganda, Senegal and Niger.

In this DifferenTakes, scholar C. Sathyamala critically examines the ECHO trial, which aimed to conclusively answer the Depo-Provera-HIV question. It ended in spring 2019. The author argues that the trial results add to the existing evidence that Depo-Provera increases the risk of HIV transmission. She challenges the World Health Organization’s June 13 statement reporting “no link.” This stance, she argues, dangerously misrepresents the study’s findings and, further, disregards key critical challenges, including those from AIDS and reproductive justice activists. As the author argues, the World Health Organization guidance fails to appropriately warn users of the potential risk associated with Depo-Provera use and wrongly concludes that it is “safe.”

Original Source: DifferenTakes is a publication of the
Population and Development Program