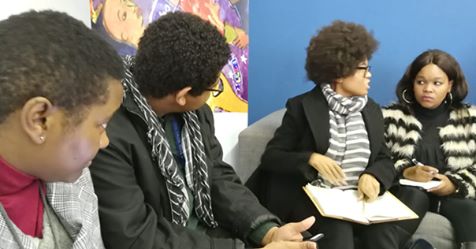 The Evidence for Contraceptive options and HIV outcomes trial (ECHO) was an open-label randomized clinical trial that compared three highly effective, reversible methods of contraception (including a non-hormonal method) to evaluate whether there is a difference in risk of HIV-1 acquisition between the three methods.  One of the methods was Depo Provera (DMPA)[i], the three-month injectable contraceptive. The results of this study are being considered by the WHO as they update contraceptive guidance into counselling noting previous concerns regarding HIV acquisition and DMPA.

Following on the need to learn and listen more about the ECHO trial, the Sexual and Reproductive Justice Coalition (SRJC), South Africa in collaboration with The University of Nottingham, UK held two events with members and partners in Cape Town to unpack what the findings might mean for  the future of  sexual and reproductive healthcare in South Africa.

Dr. Kate Law, drawing on her research on the history of family planning during apartheid, provided a historical perspective to the conversation, as well as examining the implications of the trial results from a reproductive justice perspective.

We were also fortunate to have Professor Emerita Margaret Hoffman join the conversation, as she talked about research that she conducted in the 1980s regarding the relationship between DMPA and Breast Cancer.

Ntomobozo Kraai, member of the ECHO community advisory board and founder of African Women Rising gave insights into the complexity of representing the women and girls who participated in the trial, and how social determinants of health, such as economic hardship influenced the decision of some women to take part in the trial. Kraai also noted the difficulties for women who became pregnant or HIV positive during the trial. For one woman, her partner left her as he had been convinced she had been on reliable contraception. While no form of contraception is a 100% effective in preventing pregnancy, Kraai’s contribution raised questions about the ways in which the aims and potential outcomes of the trial were communicated to its participants.

Lebo Ramafoko, Soul City Executive Director, spoke about the context of researching black women’s bodies and how power, inequality and other known structural barriers continue to put women at risk of HIV but there continues to be limited investment in the social sciences to address these challenges but readily accessible funding for studies such as these.

While the trial did not reveal any contraception as being much better or worse, over 4% of South African women sero-converted to contract HIV and are clearly vulnerable to pregnancy and HIV acquisition. Many women in the room spoke of wanting new and modern contraceptive options—the ring, the patch and the hormonal IUCD besides these older methods. Despite governments and global bodies proclaiming the popularity and indeed acceptability of DMPA to women in the region, the reality is that in health clinics around the country it is often the only method of contraception regularly available.

The conversations continued later in the evening at UCT Medical School. Chaired by medical student leader and SRJC board member Dango Mwambene,  Kate and Ntombozuko presented alongside Professor Janet Hapgood who heads the Department of Molecular and Cell Biology.

The Department has been researching in vitro work on immune cells and genital tissue, looking at the linkages between different progestins used in contraception, in particular MPA and NET[ii], and HIV-1 acquisition. Their work is consistent with a large body of clinical observational data done by others over 30 years, suggesting that DMPA, but not NET-EN, or combined oral contraceptives (COCs), increases HIV-1 acquisition by 40-50% relative to no contraception[iii]. This data is also correlates with a large body of animal, clinical and in vitro data from other researchers for MPA[iv]. The ECHO trial did not address the question of whether DMPA increases HIV-1 risk relative to no contraception, or is or is not associated with increased HIV-1 risk. One cannot conclude or infer anything about this from the ECHO results. It is important to note that the study was a comparative study—an open-label randomized clinical trial that compared three highly effective, reversible methods of contraception (including a non-hormonal method) to evaluate whether there is a difference in the risk of HIV-1 acquisition between any of the three methods. None of the three methods was a control. We do not know whether LNG implant or copper IUD have an effect on HIV-1 acquisition on their own (relative to no contraception). (In fact there is some biological data to suggest that they both could increase HIV-1 risk compared to no contraception[v][vi].) The ECHO results showed that while no difference in HIV-1 risk could be detected between DMPA and the copper IUD, the results suggest that DMPA increases HIV-1 acquisition 23-29% more so than LNG implant, and the results are also compatible with a 50% increased risk for DMPA relative to LNG implant. The ECHO results could not prove that there were no differences in HIV-1 risk between any of the methods because it was not designed to do so. It could only say if a difference was or was not detected. (This is because of the type of statistical testing of hypotheses that was performed). The inability to detect a difference would not prove or mean that there is not a difference. The absence of proof if not the same as the proof of absence of an effect. (In other words, the ECHO results have considerable uncertainty)

The head of Family Planning at UCT, Dr Malika Patel was challenged by medical students as to what they should be offering patients that they see as methods of contraception. Can one still offer DMPA given unanswered conundrums? In an audience of over 80, on a stormy and cold winters evening in Cape Town, only one person put up their hand to agree that the study had answered the question, “Do you think the ECHO trial has shown that DMPA does not increase HIV-1 risk? Dr Patel affirmed that each patient should be offered the range of options available to suit them and that health systems needed to be strengthened to ensure that we have all the options and reliable supplies of commodities.

[i] DMPA contains a progestogen. This is similar to the hormone progesterone, but has other activities as well, which is naturally produced by the female body. DMPA is given by injection every 12 weeks and is slowly absorbed into the blood stream to prevent pregnancy. DMPA, or depot medroxyprogesterone acetate, and NET-EN, short for norethisterone enanthate, are progestin-only hormonal contraceptives. DMPA (widely known by its marketed name Depo-Provera®) is administered every three months, while NET-EN (or Noristerat®) is given every two months

A key ref for implant is:

Some key papers for Cu-IUD are: