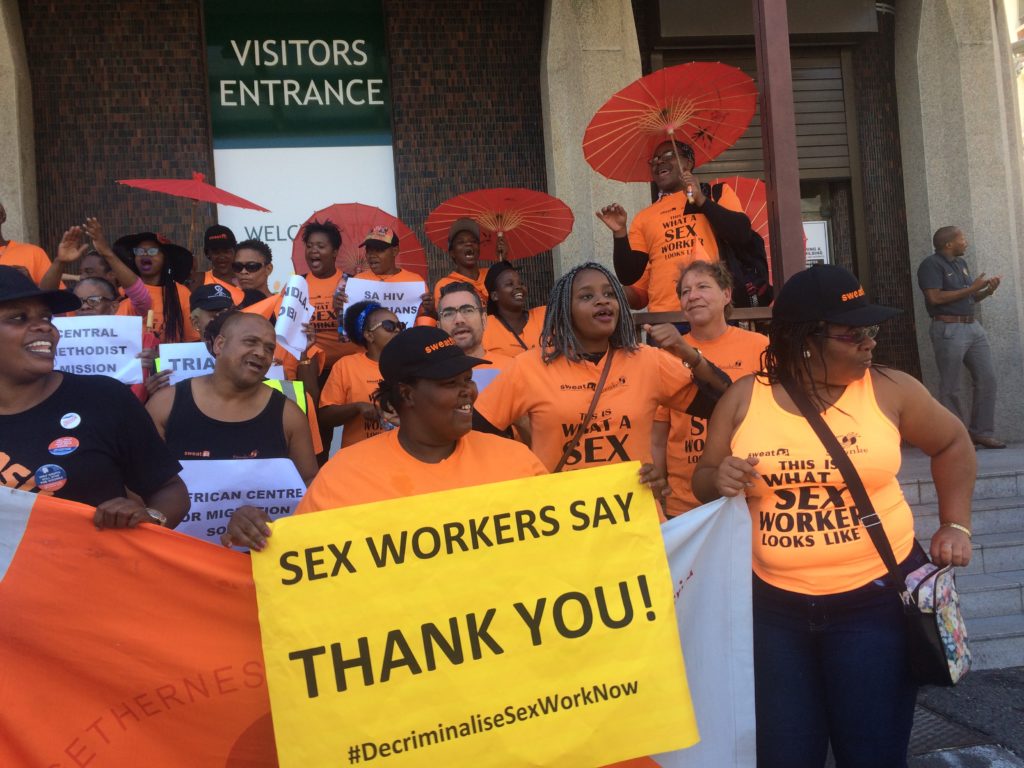 On December 20, 2017 the leading political party (African National Congress-ANC) resolved for the decriminalisation of sex work at one of their conferences. This came as a victory after the party had rejected a decriminalisation proposal at the July ANC conference the same year.

Getting support from political parties is a victory for the sex work movement that has been putting in work for decades on end around the decriminalisation of sex work. Our partner organisations: SWEAT,Asijiki and Sisonke Movement for sex workers have all been working and restless and advocacy for decriminalisation.

On Monday, March 5, the Multi-Party Women’s Caucus held an all-day summit to discuss the current Law Reform Commission Report on sex work, which is currently resolving for partial sex work decriminalisation, also known as the Nordic Model. This means that sex workers will not be criminalised for trading sexual services, but the clients will be. This model further entrenched the violence inflicted on sex workers.

Dr. Tlaleng Mofokeng, SRJC Vice Chair, was one of the civil society members who made a submission and was invited to deliver an oral statement and engage in the debate on the date. Below is the statement she delivered.

Thank you Chair for this opportunity.

I deliver this statement in my capacity as a sexual and reproductive health and rights expert,
representing a Black woman led emerging organisation, Nalane Associates, as the Deputy Chair of
the Board of Sex Work Education and Advocacy Taskforce (SWEAT) and the Vice-chairperson of the
Sexual and Reproductive Justice Coalition and all its 140 members nationally.

The South African health department as well as the South African national AIDS council, SANAC must
end the silence on sex work decriminalisation beyond concerns around HIV. In particular, SANAC
must still explain how the support for sex work decriminalisation has vanished from their national
strategic plan. They both lack comprehensive occupational health and safety plan despite their
acknowledgement that sex workers are a population at risk.

The only health drive aimed at sex workers is around HIV testing. Not all sex workers are HIV
positive. HIV is not the only concern that sex workers have.
Did you know that in 1996, a health care provider, Prof E McIntosh was harassed and taken to court
for doing a study to inform occupational health and safety of sex workers? In the end, the state lost
its case.

As with global attacks on women’s autonomy, in South Africa, in 2018, we find ourselves having to
defend the Choice on Termination of Pregnancy Act, therefore we will not tire to defend sex worker
rights. We will defend their constitutional rights.
South Africa is a country founded on principles of supremacy of the Constitution, and human
dignity, equality and freedom. These founding values are said to inform how the state acts towards
its residents. The Constitution speaks aptly that everyone has a right to dignity. This right is not
determined by the occupational work that you choose to have, it is a right afforded to everyone.
Thus the current criminalization and treatment of sex workers violates the right that is jealously
guarded by the Constitution. Moreover, the Constitution provides that everyone has access to
health. Again, it bears noting that the constitution does not discriminate in prescribing who should
have access to health care. The denial of access to health is a direct infringement of
the constitutional right of sex workers. This goes against the very prescripts of the Constitution. It is
imperative that Parliament as the makers of laws in this country do not continue to criminalisation
sex workers vocation and consequently deny fellow South Africans their constitutional rights without
a reasonable limitation under the limitation clause in the Constitution.

The WHO has stated its support to countries efforts to address structural barriers and ensure sex
workers’ human rights as well as implementing a comprehensive package health services for sex
workers through community lead approaches. Decriminalisation is also supported by UNAIDS, The
Global Commission on HIV and the Law, and the Lancet Journal , as well as human rights
organisations like Human Rights Watch, Amnesty International  and the South African Commission
for Gender Equality.

Evidence, NOT morality, should guide sex work policy.
Sex work decriminalization is a sexual and reproductive justice issue.
Our position stems from being informed from a reproductive justice perspective which appreciates
the intersectional oppressions borne in particular by marginalised persons. Sex workers have
informed our position and analysis noting how decriminalisation of sex work will assist in addressing
health care needs in particular to contribute towards remedying neglected areas including:
violence (reporting sexual assault); accessing sexual and reproductive health services without judgement (including screenings for cancers, contraception and abortion); access to HIV treatment and services.

We are particularly concerned about content and processes in the development of the SALRC report
and do not support their recommendations. In addition we would like to continue to affirm our
support for the Joint Multi-Party Women’s Caucus and their position in support for the full
decriminalisation of sex work.

Quoting from the Human Rights office of the high commissioner, “Human Rights are not the subject
of Public opinion polls. Human rights exist precisely to protect individuals whose rights may not be
adequately respected by the majority.”

We look to parliament for timelines and continued engagements with sex worker led organisation.
We reject, and will continue to reject all attempts to portray sex workers as powerless and voiceless.
We affirm the human rights of sex workers to be autonomous, to live and work with dignity.