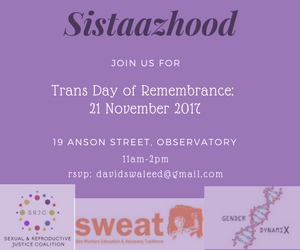 Additionally, during the week of November 13-19, people and organizations around the country participate in Transgender Awareness Week to help raise the visibility of transgender people and address the issues trans people face.

What is the Transgender Day of Remembrance?

“The Transgender Day of Remembrance seeks to highlight the losses we face due to anti-transgender bigotry and violence. I am no stranger to the need to fight for our rights, and the right to simply exist is first and foremost. With so many seeking to erase transgender people — sometimes in the most brutal ways possible — it is vitally important that those we lose are remembered, and that we continue to fight for justice.”
– Transgender Day of Remembrance founder Gwendolyn Ann Smith

On Tuesday, 21 November, comrades and peers will gather to remember those who have passed on in recent years at the SWEAT offices in Observatory, from 11am to 2pm. (See flyer for address).

Amongst other speakers, Ms Leigh Davids who is the founder member of Sistazhood and cross movement organizer for the SRJC will speak on the violence experienced by trans women in her community, where many mothers violently reject their trans daughters and express the desire in unfortunately colourful language that they wished they had aborted them. For many trans women sex workers abortion is a familiar option that their cis gender peers choose as they have unsupported pregnancies. Due to criminalisation of sex work, many sex workers are not able to access public health facilities and resort to illegal or informal providers. This ends up being a kind of systemic violence.

In remembering those that have passed on we will experience some artivism from Sistazhood and will light candles and have a minute’s silence in a vigil.